Now I Can Die Happy

Sent Chris Hillman -- bass player of The Byrds and one of my musical heroes since high school -- a copy of the Floor Models Byrds tribute album and received the following reply end of December 2021.

I'm not kidding about the die happy thing.

Posted by steve simels at 7:06 PM No comments:

WHO DID WHAT? THE COMPLETE CREDITS FOR "IN-FLYTE ENTERTAINMENT"

And after four months of beauracratic mishegass, I am pleased to announce that it is finally available for streaming and download over at Amazon HERE.

In the meantime, here is the stuff that wouldn't fit on the actual physical CD graphics.

So -- here we go. None of the names have been changed to protect the innocent.

THE FLOOR MODELS -- In-Flyte Entertainment: A Tribute to the Byrds" WHO DID WHAT!

3. "I Come and Stand at Every Door" Steve Simels (lead vocals and bass) Joe Benoit (harmonies, guitars and drums)

5. "So You Want to Be a Rock ’n’ Roll Star" The Floor Models (all vocals and instrumentals)

6. "All I Really Want to Do" The Floor Models (vocals and instrumentals) Stu Daye (additional harmony and guitar) Joe Benoit (outro guitar)

7. "Wasn’t Born to Follow" The Floor Models (all vocals and instrumentals)

12. "Chimes of Freedom" Gerry Devine (all instruments and vocals)

Produced by Steve Simels. Except tracks 1 and 12: Produced and engineered by Marc Moss at Target Studio, Red Hook, NY

Special thanks: Randy Welch for loan of the acoustic 12-string; Tommy Perkins for the album title

Posted by steve simels at 4:59 PM No comments:

Update on What Is Definitely the Album of the Year

This post is for Hardcore Byrds Fans (HBFs), a small subset of humanity that -- unless I'm very much mistaken -- includes a fair number of the people who hang out at this here blog.

Okay, to make a short story long: Back in June of the storied 1967 Summer of Love, the aforementioned Byrds released a single called "Lady Friend." 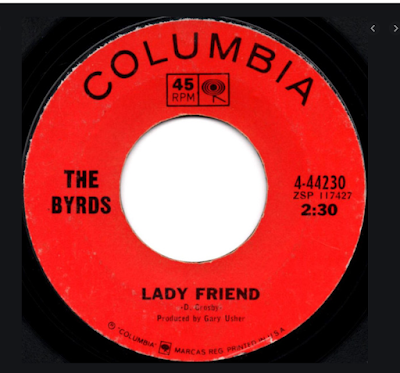 Apart from the fact that it was an absolute masterpiece -- and this is something that's been confirmed by the judgement of history -- it was also the only Byrds single written solely by David Crosby.

In any case, the teenaged me bought the damn thing, and played it endlessly, to the point that by August it was more or less worn out. And I recall, vividly, waiting in breathless anticipation for the release of the next Byrds album, so as to be able to enjoy the song in stereo, as nature intended.

Imagine my chagrin, then, when said album, which came out in January of 1968 and turned out to be the otherwise fabulous The Notorious Byrd Brothers... 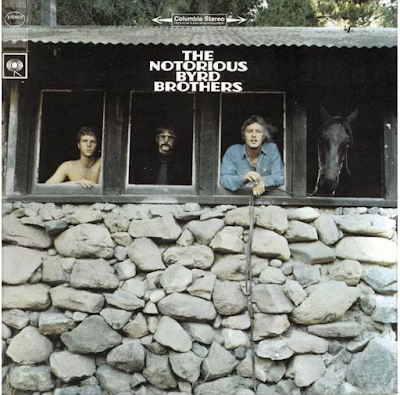 ...did not feature said song in either mono OR stereo, and that Crosby had been fired from the band and replaced on the album cover by a horse. Which presumably Crosby is still pissed off about, although who knows?

Cut to the present, where attentive readers are aware that my old band The Floor Models has been working for over a year -- pandemic very much? -- on a Byrds tribute album. 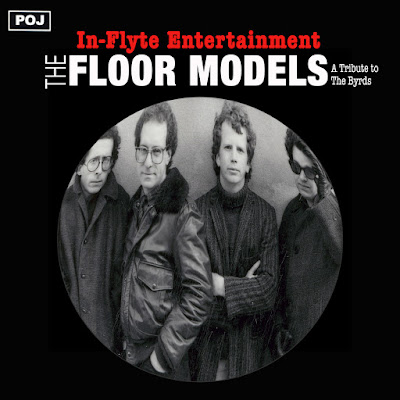 But what said attentive readers do not know is that just last week we finished -- 95 percent -- the last track on the album, which by an odd coincidence turns out be "Lady Friend."

And because I love you all more than food, here is said version. Enjoy!!! Oh -- and I should add that the track features our good friends and musical colleagues Swifty and Dupree's Amplified Heat, a crew that I will tell you more about when the album arrives (we have all sorts of interesting guest artists on it.)

BTW, to my knowledge, despite the splenditude of the song, the only cover version by a band anybody's ever heard of is by the usually estimable Flamin' Groovies. Alas, IMHO, it sucks. There's another one by The Posies, which is nice, but it's unplugged (i.e. all acoustic without a rhythm section), so I don't think it counts.

I should add that when our Byrds tribute album is commercially available -- which should be by late June -- I will be alerting you folks quite loudly.

I should also add that the guy playing the glockenspiel part on the intro and outro of the song is some asshole whose name rhymes with Sleeve Nimels.

My current favorite song from that Floor Models tribute to The Byrds I've been bugging you about of late. 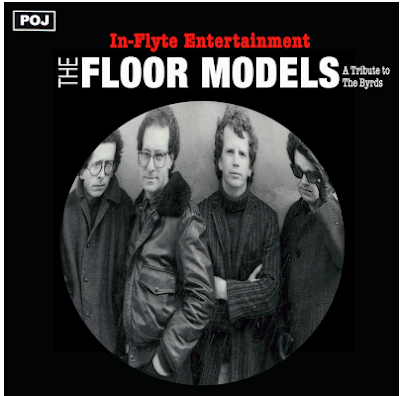 FYI, the above is only 95 percent finished; it isn't mixed, and the fake string solo will be considerably more ornate after I redo it.

That said, I absolutely adore the track even in its current form, and bless our old Village pal Marc Jonson for his brilliant work on vocals and 12-string.

I should add that we're two songs away from having a finished album; the great Willie Nile has contributed an acoustic version of "You Ain't Going Nowhere," that we're going to add a full band to, and Gerry is hard at work on a version of "Chimes of Freedom," a song that I've always loved but seems especially relevant in the post-President Shiit for Bains era. I'll keep you informed.

So in case you were wondering, here's what's happening with the forthcoming Floor Models tribute to the those guys with the Rickenbacker 12-string.

At the moment we have 9 songs in more or less completed form as well as some amazing album art (courtesy of my beautiful and brilliant art director girlfriend... 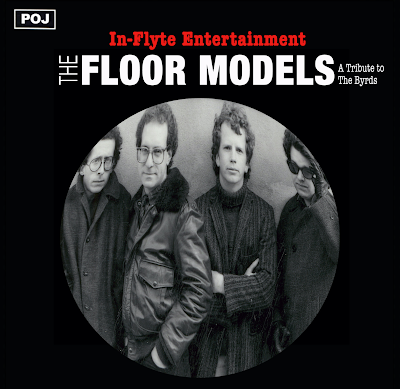 ...who as always is working cheap); the current plan is to finish two more tracks this month and then to get the whole thing out immediately to a world clamoring for more Floor Models stuff, but as you know, these things always take longer than you hope or expect. In any case, I'll keep you posted.

Meanwhile, here's the fully finished opening and closing tracks; hope you enjoy them.

I should add that "We'll Meet Again" features our old pal and auxiliary Flo Mo Ronnie D'Adarrio on all vocals and instruments, and we offer it up as a farewell to our late great bandmates Andy Pasternack and Glen Robert Allen. I hope somewhere in heaven they are listening to it and smiling. 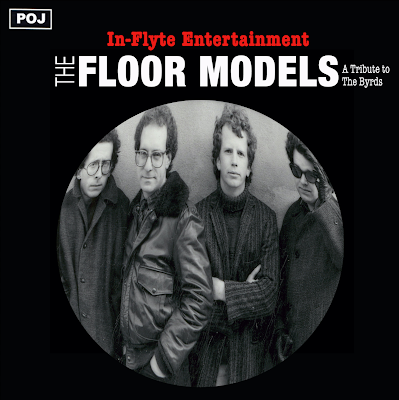 ...please enjoy The Floor Models (featuring some asshole whose name rhymes with Sleeve Nimels on bass and synth strings) and their gorgeous cover of the Gene Clark classic "Here Without You."

There'll be a little tweaking of this (which we otherwise finished in the studio last night) when we finalize the album mix -- and it's now looking like the record is gonna come out early next year -- but I think this is just terrific, and god bless our special guests Peter and Caleb Spencer, who did absolutely stellar work on it.

I should add that if you think the front cover is cool (which it is), wait until you see what we're gonna do with the back cover. Heh.

Your Monday Moment of Steve Fulfills a Life-Long Dream

So thanks to the miracle of modern technology, I just got to sing and play with the freaking Byrds. 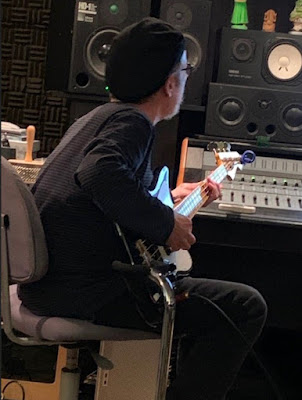 The back story: As you may or may not know, I am in the process of putting together a final Floor Models record -- specifically, either an album or an EP that will be a tribute to The Byrds (titled In-Flyte Entertainment, courtesy of friend of PowerPop and moi Tommy Perkins. Thanks. Tommy!). This is going to feature a lot of my musician friends -- some of whom you will be familiar with -- but the core group of players is going to be the surviving Flo Mos before we shuffle off this mortal coil, which could be any minute now. Heh.

In any case, I've been kicking this idea around since last year, and at the time I was conceptualizing it, I was hobnobbing with our late great drummer and dear friend (or, as I used to refer to him, my musical director for the last 50 years) Glen Robert Allen. My idea was that we'd restrict the Byrds songs being covered to those they had done between their debut LP in 1965 and their final album involving David Crosby in 1967, i.e. just their folk-rock and psychedelic stuff, before they went country-rock. The music that had principally influenced the Flo Mos.

Glen, however, being the brilliant guy he was, said to me "Uh, Steve -- that's great, but if you don't include "Tulsa County," the gorgeous country song from the Ballad of Easy Rider LP, then you're a mongrel idiot." I was not immediately convinced, but I do in fact love that song and on reflection -- not even considering Glen's health issues at the time -- I ultimately agreed with him.

Bottom line: A few weeks ago -- the intertubes being the wondrous things they are -- I found an instrumental track of the Byrds recording of said song, sans lead vocal and with a barely audible bass. And then last Thursday I went into the studio and put a new vocal and bass part on it.

Which is to say I finally got to collaborate with my favorite band of all time.

The track isn't done -- ultimately we're gonna replace all the original instrumentation, including adding an electric 12-string to it, which should make it sound less country-rock and more 1966. But in any case, this rough version is now the favorite thing I've ever done artistically in my entire life. I think it really sounds like an authentic Byrds outtake I just happened to sneak onto when they weren't paying attention.

I should add that I barely recognize my voice, which is a good thing. I'm well aware that I've never been a particularly good singer; basically, I can negotiate a sort of snotty sounding nasal Jewish suburban punk Lou Reed kind of thing at best. But here, I think, I've done better; to my ears, the vocalist on this genuinely sounds like his heart has been broken.

I'll keep you up to date on the progress of the track and the album itself as things develop. And god bless you, Glen.

Posted by steve simels at 5:45 AM No comments: